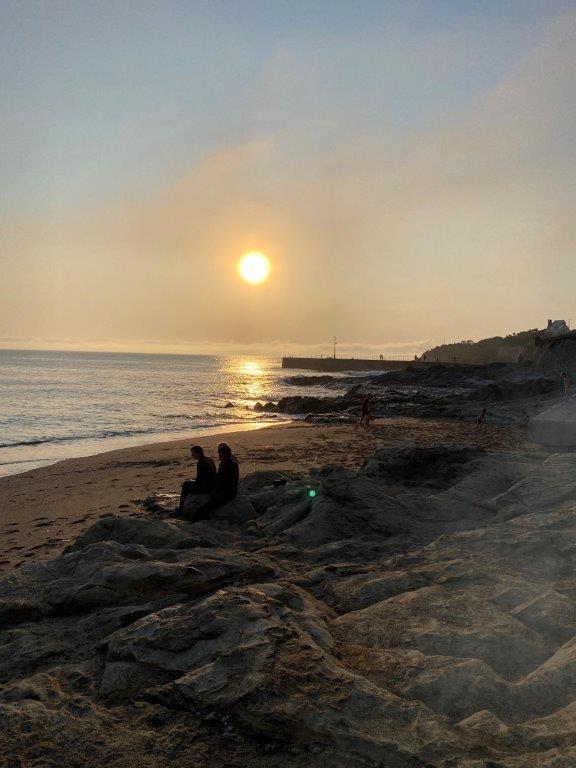 Porthleven
Just down the road from Trewithick Farm campsite is the iconic fishing port of Porthleven. This absolute jewel of a fishing village is steeped in history and Cornish folklore. The name “Porthleven” is thought to have been derived from “St. Elvan”, who was a compatriot of St. Breaca, the patron saint of Breage, a nearby village. Earliest records tell that it was a little fishing village nestling in the shelter of a wooded valley of a tiny creek in Mount`s Bay.
Offering some protection from the storms and high seas which batter these coasts the Harbour at Porthleven has been home to a very hardy fleet of fishing boats for centuries. With so many ship wrecks on this part of the coast, many a local fishing boat has been lost to the Atlantic storms over the years.
Now its a smaller fleet of hardy local fishermen which remains, still this idyllic Cornish haven has little changed over the last hundred years or so.
Porthleven is a treasure trove of history steeped in fishing folklore and has been home to a hardy fleet of fishermen for centuries. Porthleven is also a food lover’s dream, with its annual food festival and a host of wonderful restaurants to suit all budgets and tastes. There are several chip shops including ‘Landed’ which is a connoisseur take on traditional fish and chips as well as a place owned by someone called Rick Stein? Gift shops, ice cream, fish monger, and regular market stalls. There is a gourmet coffee shop, luxury deli as well as a large convenience store and post office for all of your essential requirements.
You can go on boat tours from the harbour to see the stunning coastline from a different angle and hopefully spot some local sea life.
There are some great pubs including the famous ‘Ship Inn’ which is little changed in centuries and offers the perfect combination of cosy traditional pub, great food and drinks, unbeatable atmosphere and stunning views of the harbour and breaking surf .
Porthleven is also a wave watchers paradise as the shelved beaches and overhanging cliffs provide the perfect amphitheatre for huge crashing waves whenever there’s a storm in the Atlantic and you can spend hours watching the surf crashing over the tops of the nearest houses and harbour…just make sure you stay well back!
All this just a short walk or even shorter ride from your campsite, this is a perfect place to start your exploration of West Cornwall.
Marazion And St Michaels Mount
Just a 10 minute drive from Trewithick farm is the truly iconic and ancient trading site of Marazion and St Michaels Mount. This post-card beautiful Castle on an island which is cut of by the high tide and reachable by causeway at low is an absolute must see for anyone visiting West Corwall.
Widely believed that Marazion has a connection with the Jewish community that was settled here due to its name Mara-Zion . In fact, its name is derived from the important fairs and markets that were held here – the earliest recorded was in 1070. Marazion was also the major town in this area until the late medieval period when Penzance started to take over.
As early as 495AD, tales tell of seafarers lured by mermaids onto the rocks, or guided to safety by an apparition of St Michael. The patron saint of fishermen, it’s said the Archangel Michael appeared on the western side of the island – below where the entrance to the castle is today – to ward fishermen from certain peril. It’s a legend which has brought pilgrims, monks and people of faith to the island ever since, to pray, to praise and to revere.
By the time of the Norman Conquest in 1066, the island had come into the possession of the Benedictine abbey of Mont St Michel in Normandy.  Construction began in 1135 on the church and priory buildings at the summit. From 1193, when the Mount was seized by Henry La Pomeray (who disguised his men as pilgrims), through the Wars of the Roses in 1473, when the Mount was held by the Earl of Oxford, to the Civil War, when Royalists valiantly held back the forces of Oliver Cromwell, the Mount has weathered many times of battle.
For centuries, tin and copper were exported from both Marazion and St. Michael’s Mount by traders and shippers. The town was surrounded by mines, such as Wheal Prosper, Wheal Crab, Wheal Rodney, Tolvadden and South Neptune. These mines remained active until a depression struck the industry in the late 19th century. You will still see many of these names today.
Agriculture remains a major industry. The warmer winters mean potatoes and brassicas can be harvested early in the year. And daffodils are grown for their bulbs, adding a splash of bright colour to winter landscapes.
Today, Marazion is one of Cornwall’s most popular tourist destinations. Nearly 300,000 paying visitors climb up to St Michael’s Mount every year with thousands more just taking a stroll to the island.

We strive to create unique spaces and activities to allow you to escape.

Enter your email address to keep up with our tailored events.